We are so excited to share a new visualization, developed by Sarah Campbell and Zheng-yan Yu as part of Professor Cody Dunne’s Special Topics in Data Visualization course.

As the “About” page explains, the visualization shows where the top twenty most common person names, place names, and organization names appear:

This data was queried from the Women Writers Online textbase and includes metadata for each of the 401 texts as well as three in-text elements. Multiple values for each element can exist in each text; for example, a text can have multiple person names identified. See the TEI guidelines documentation for more about encoding of in-text elements. Below is the original count of in-text element values:

The original queried data listed the in-text element values as one string for each text, with separators in between. We parsed the data so there existed a row for each combination of text and in-text element value; if a text included 10 person names, there would be one line for each name. We then manually aggregated values that were common, like Catholic Church and Catholike Church. These aggregations were based on sense and were not completed for the entirety of the data, but were completed enough in order to truly show the most frequent in-text element values. We visualized the top 20 values for each in-text element and their relationship to texts they reside in.

This is a prototype visualization and we plan to develop additional features and functionality as we move forward with adding new resources in the WWO Lab. Even as a prototype, however, it can reveal interesting patterns in the WWO texts—for example it shows that there are a number of references to the British Parliament in non-fiction texts during the turbulent 17th century: 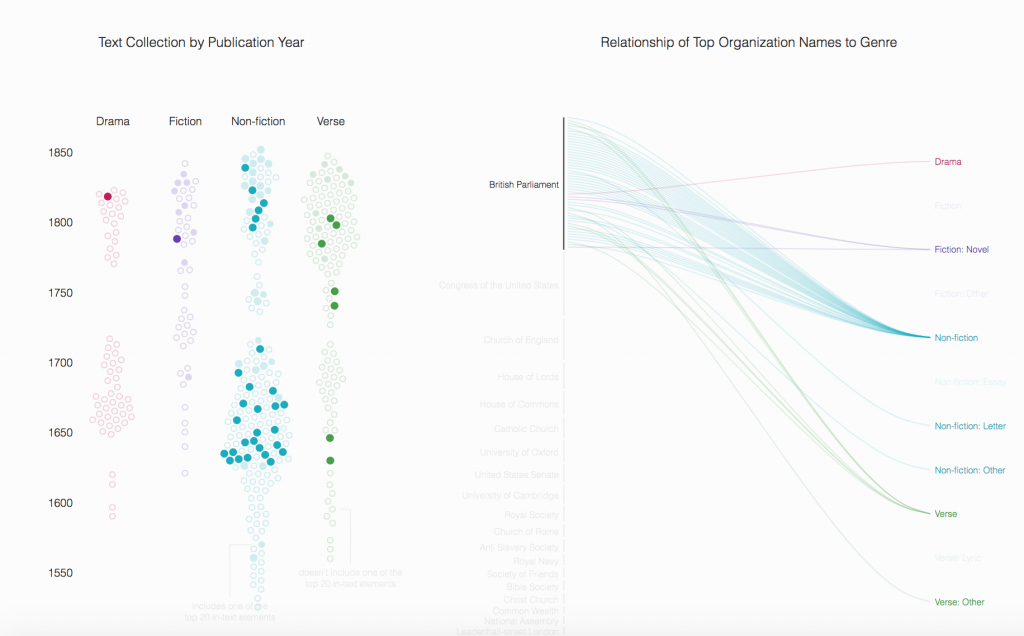 We hope that you enjoy experimenting with this prototype!