This post is part of a series authored by our collaborators on the Intertextual Networks project. For more information, see here.

In my previous post for the Intertextual Networks project, I outlined some of the background of the Sidney family and of my planned contribution to the project; briefly, scholarship on the women of the Sidney family accepts as fact a strong literary relationship between Mary Wroth and her aunt Mary Sidney Herbert. Wroth is mostly clearly influenced by her uncle Philip Sidney, by Petrarch, and to a lesser degree by family friend Fulke Greville and poets Samuel Daniel and Ben Jonson. Yet there are no documented literary allusions to her aunt’s literary works, either in print or in manuscript. This absence raises questions about scholarly practice: why are scholars convinced that Sidney Herbert was a literary influence if Wroth, otherwise so allusive, seems to have no interest in texts written by another literary Sidney woman?

In fact, scholars claim a literary relationship without stylistic evidence to support it. Instead, they point to biography, citing the familial connection as well as the historical facts of residence in London and Penshurst. By relying on biography over allusion, substance over style, scholars—I argue—are reproducing the gendered language of Renaissance debates of masculine substance and feminine style. Thus, I set out to visualize the absence of literary allusion, in order to understand what literary relationships might look like outside of our traditional understandings of intertextual allusions.

When I first began this project, I had this hypothesis in mind, as well as a clear set of computational tasks: in seeking to understand literary absence computationally, I needed to enable the computer to process my texts. Most of my work for about a year was a process of finding the texts of other Sidney family members: the WWP provided me with the files for Mary Wroth and Mary Sidney Herbert, but I quickly found that there was indeed an absence. In fact, there seemed to be absolutely no connection between the two women, no matter how I posed the question. This included looking for similarities in vocabulary, as well as similar patterns of what are called function words, or words like a, the, and, but that are frequently used for authorship studies. Function words are typically better indicators of authorship because they are very common, and because they create patterns of use that authors themselves might not be aware of.

But neither in word choice nor lexical patterning were there any connections between the two women. In some ways this created a dead end: I had set out to visualize absence, and had done it, in that I had nothing to see. I thus expanded my archive, so to speak; if Sidney Herbert was not a literary source for Wroth, perhaps I could find other familial connections. I then spent nearly eight months tracking down the electronic texts of Philip Sidney and Robert Wroth. While Sidney’s texts were fairly readily available in places like the Internet Archive or Project Gutenberg, Wroth’s only existed in print form and in a proprietary digital version from Oxford University Libraries.

I’ll spare further details here of the frankly ridiculous amount of work it took to obtain Robert Wroth’s text in a form necessary for my project, though I’ll have a fuller explanation in my final project. Suffice it to say, I am indebted to Yehven Melnyk for his help in writing a Python script to scrape the text.

In the interest of space, I’ll skip some of the process here and move straight to the products, though I am very excited to share the results more in depth soon. As I mentioned above, I continued to find nothing in my search for allusions between Mary Wroth and Mary Sidney Herbert; it looks to be that the reason there are no documented allusions is because they in fact do not exist. But I did find another absence of connections in places I expected to see them, namely between Wroth and Philip Sidney.

It is a truism by this point that Wroth alluded heavily to her uncle’s work, and that she in fact highlighted her status as a Sidney through various literary means up to and including in the design for the frontispiece to the long prose romance The Countesse of Montgomerie’s Urania (see Sanchez, 2007). Given the multiplication of connections between Wroth and Philip Sidney, then, I expected to see those connections displayed in my data visualizations. In fact, I used the similarities between Astrophel and Stella and Pamphilia to Amphilanthus to confirm that my code was correct, in that it was finding the connections I already knew existed.

One example is here: the full plot shows the entirety of the Sidney family corpus, and the selection demonstrates the proximity of AS and PA. 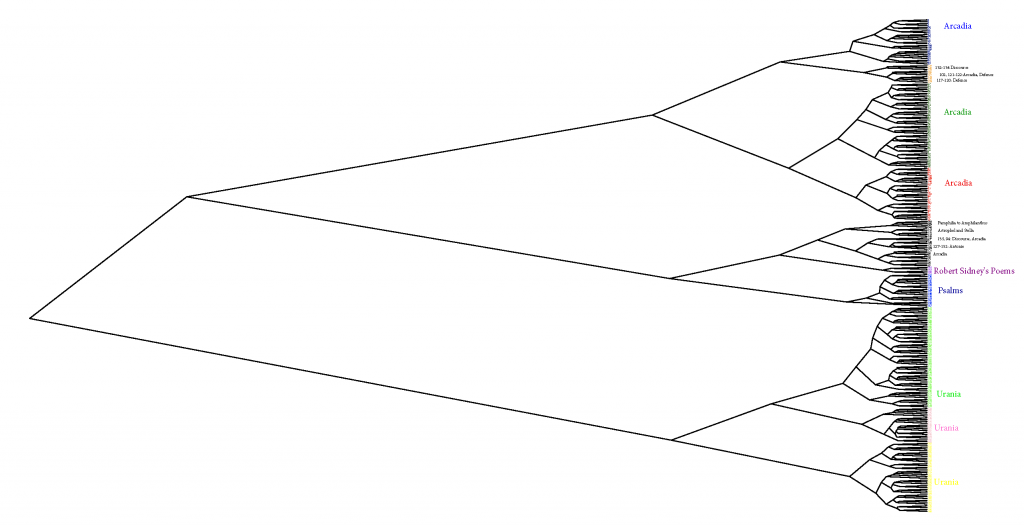 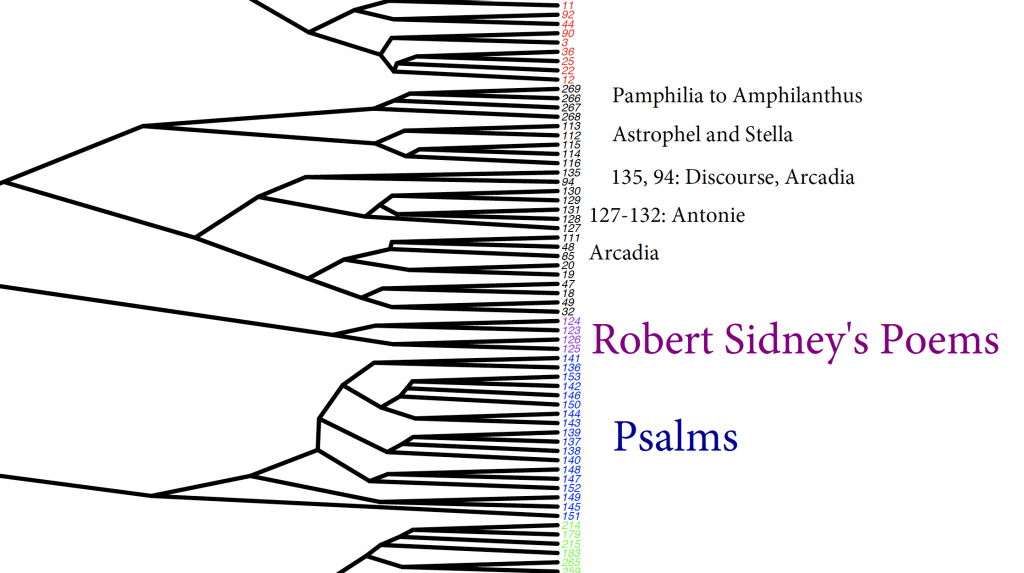 Numbers 266–269 are the chunks of text that incorporate PA, and numbers 112–116 are AS. This dendrogram is a type of plot explicitly designed to represent distance and similarity between data: the closer branches are to one another, the more similar they are. As proximate clusters, AS and PA are very near to one another.

This connection serves as confirmation that my coding is accurate. And if the coding is accurate, in that the program is finding connections I already know are there, then what I am about to describe is quite surprising. Namely, the Arcadia and the Urania are as far apart as it is possible to be. Both are prose romances—though both frequently dotted with poems—both are very long, and the frontispiece of the Urania explicitly connects Wroth and her text to her uncle’s Arcadia. Briefly, these texts should be nearer than they are.

In the interests of space I am skipping some other computational techniques (namely, latent semantic analysis) that further confirm that these plots show a lack of literary affinity in every place I expected to see it. But I am also wondering if what these plots show is a kind of similarity that cannot be based in affinity. And so I ask, what is literary allusion/tradition/community if it is not based in similarity?  Or, what is allusion if not likeness?

The conclusion I have tentatively reached here is this: Wroth’s allusive practices are so sophisticated that she is able to control even the typically-subconscious patterns of syntax and function words so that her poems look exactly like her uncle’s but her prose is completely different. What I like about this is that we can accept that Margaret Hannay (1991, 2015) and Ilona Bell (2015) are somehow right in identifying literary influence without literary evidence: Wroth can remain an allusive author, and maintain a lack of connection where she so chooses. If Wroth is this good, then yes, Sidney Herbert might be the most important literary mentor, even though she seems to be entirely absent from Wroth’s literary work. And if this is all true, than Wroth is perhaps one of the best writers I’ve ever seen, so aware of her craft she is able to carve a place for herself where she can control every aspect of her literary environment.