To celebrate our thirtieth anniversary, we are launching a new series featuring images from the WWP’s history throughout the past few decades. We hope you enjoy the series!

Since our inception at Brown University in 1988, the Women Writers Project has worked with various methods of publishing early women’s texts. We’ve used many different technologies and tools to transcribe, encode, proof, and publish 411 texts by women between 1526 and 1850 as of winter 2018. We’ve encoded these texts from a reproductions published in a number of different formats, including digital facsimiles, microfilm, and photocopies. Our archives have expanded tremendously since our early days and we continue to add ten to twenty new texts each year. Here are some of the tools, standards, and technologies that have made Women Writers Online possible.

The texts published in Women Writers Online are encoded according to the standards of the TEI Guidelines for Electronic Text Encoding and Interchange. The first official version of the Guidelines was released in 1994, several years after the WWP began transcribing early women’s texts (for more on the history of the Guidelines, see here). 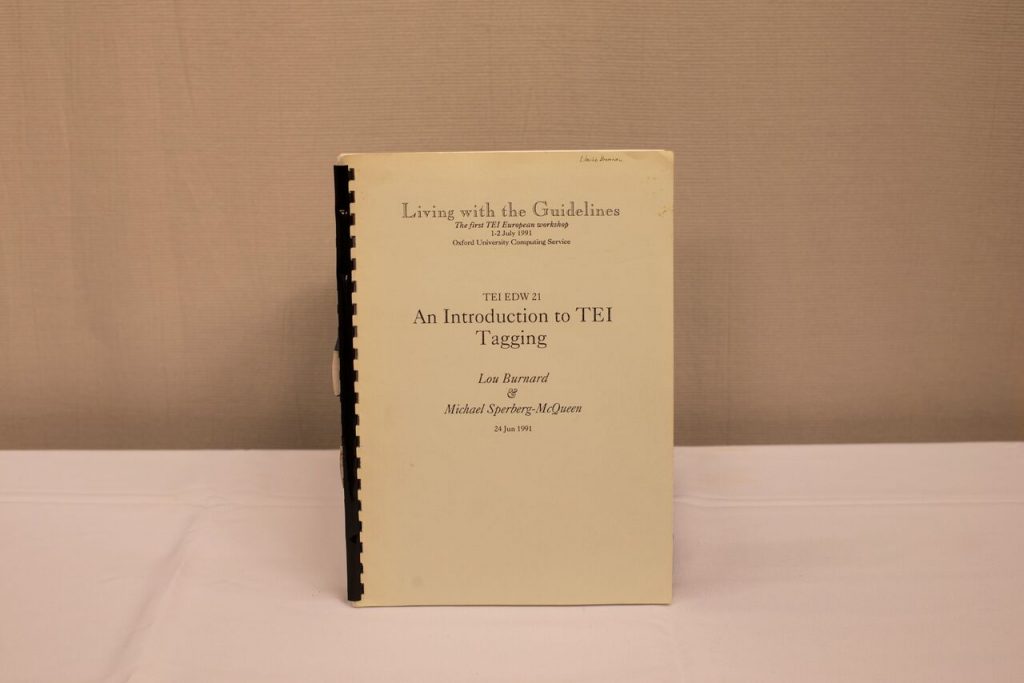 Updating those initial transcriptions to conform with TEI standards in 1994 was just one of several times that WWO encoding has changed with new releases to the Guidelines—we are currently following a customized version of the P5 guidelines, which were released in 2007. For more on our customization see here.

Over the past three decades, we’ve used a variety of mechanisms to document our encoding practices. Since our intended audience is both scholarly and broadly interdisciplinary, our encoding practices try to capture a wide range of textual features. These include: basic document structures, the appearance (or “rendition”) of the original document, generic features such as verse lines and dramatic speeches, named entities, and editorial interventions and uncertainty—among many others. It’s important that this documentation be very detailed and specific so that our encoding remains consistent, despite the complexity of our texts and the number of details that we capture. Our current internal documentation is available here.

To make sure that we maintain consistency and accuracy in our encoding, we’ve developed a highly structured proofing process. Over the years, we’ve used a number of different mechanisms for proofing.

Our current proofing process combines a manual reading of the encoded text against the original, along with programmatic checks looking for the kinds of errors that can be predicted and located computationally (such as identifying missing spaces in transcribed text—for more on some of our automatic processes for detecting errors, see this article).The combination of human and computer-based proofing helps to ensure that the texts we publish are as error-free as possible. As we proof, we use a number of mechanisms to make sure that all steps have been completed in the right order, ranging from printed proofing cover sheets to online checklists and systems for tracking editorial workflows.

We have used a number of different publication methods drawing upon our encoding, including books, paper printouts, and CD-ROMs. Women Writers Online was first published on the web in 1999 and the interface has been updated several times since then. We have recently begun adding to the options that the WWO interface provides for reading and searching texts—for example, readers can now switch between original and regularized typographic features. We expect to release a major update to WWO in the spring of 2019 that will provide readers with a substantial number of additional reading and display options.

Celebrating and Continuing Our Thirty Years of Research

Our technologies and resources have grown tremendously since the WWP began work on early women’s texts in 1988; we hope that this post has helped to highlight some of the ways the project has changed and grown over the last few decades. Watch this space for new posts in this series, as well as a new series we have also launched in celebration of our anniversary: “Thirty Years, Thirty Ideas,” which will offer tours through the texts in Women Writers Online based on some of the topics discussed by our authors. For more on “Thirty Years, Thirty Ideas” see here.