This is a post in a series authored by our collaborators on the Intertextual Networks project. For more information, see here.

By Tabitha Kenlon, Assistant Professor at the American University in Dubai 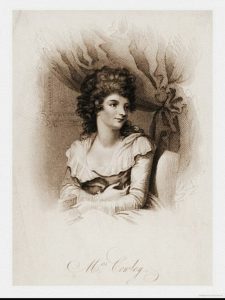 My previous post explored eighteenth-century British playwright Hannah Cowley’s references to and borrowings from William Shakespeare in her A Bold Stroke for a Husband. That play contains a direct reference to Taming of the Shrew and features a cross-dressed heroine and a love quadrangle that seems to have been inspired by Twelfth Night, though with notable differences. Cowley’s 1779 short farce Who’s the Dupe?, which premiered four years before Bold Stroke, is more subtle in its nods to Shakespeare. Indeed, the aspects of the plot that seem to be allusions are not devices restricted to only works of Shakespeare; however these moments can be seen as preparation for Cowley’s later and more direct engagement with Shakespearean tropes. An examination of Who’s the Dupe? and The Merry Wives of Windsor also reveals what had and had not changed about stagecraft and attitudes toward women across the two centuries that divide the plays.

The most obvious connections between Who’s the Dupe? and Merry Wives are those that are in some ways the least remarkable. Both plays feature women who outsmart men and both plots involve a secret male lover disguising himself as a woman (though in Merry Wives the man is not really loved). Neither of these devices is wholly unique, but Shakespeare and Cowley employ them in different ways to comment on the status of women. Both plays also draw attention to the performances undertaken by the characters within the story, many of whom engage in some kind of deception or disguise.

Any consideration of gender on Shakespeare’s stage must bear in mind that there were no biological women on the legitimate English stage when Shakespeare was writing. Merry Wives contains numerous sly acknowledgments of this fact. For example, when Sir Hugh suggests a marriage between Slender and Anne Page, Slender says of her, “Mistress Anne Page? She has brown hair and speaks small like a woman” (1.1.47-8)? She speaks like a woman because she is being played by a young man who is not a woman. Similarly, at the play’s end, when Anne’s parents have separately conspired with one of her suitors, encouraging each of the two men to sneak off and marry her, both men indigently come back with false Annes who have turned out to be young men in dresses and wigs. When the true Anne appears with her new husband Fenton, she is also a young man in a dress and wig, yet not within the action of the play. Disbelief has been willingly suspended, but the presence onstage of two de-wigged young men in female apparel standing next to another man maintaining the charade can only serve to heighten awareness of it.

The juxtaposition of one believable female performance with a less-convincing one also occurs earlier in the play, when Mistresses Ford and Page disguise Falstaff as a woman to hide him from Master Ford, who is on his way home, convinced that he will discover his wife is unfaithful. The women ordering Falstaff into the ignobility of female dress are themselves men, but their costumes are intended to be taken seriously, while their victim’s dress is the object of a joke. The women’s clothes simultaneously reduce and elevate the men who wear them. Falstaff has little real regard for the women he pursues—he wrote the same love letter to both of them and seems to hope equally for monetary and sexual favor. To him, then, being dressed as a woman would be a degradation. But the young men playing the roles of Mistresses Ford and Page portray two of the most clever, mischievous, and virtuous women in Shakespeare’s oeuvre. They outsmart all the men of their acquaintance; so in Windsor at least, it might be preferable to be a woman rather than a man.

By the time Who’s the Dupe? premiered almost two hundred years later, women had been writing for and acting on the stage for more than a century. Therefore, the two women dressing Captain Granger as his future bride’s seamstress are in fact, women. Elizabeth Doiley has decided she wants to marry him, but her father has selected a scholar named Gradus for her instead. She and her cousin Charlotte have a plan, which they are explaining to Granger when Elizabeth’s father approaches. The women have already reversed the male-female power dynamic through their scheming: Elizabeth scolds Granger for being “a mere bungler at contrivances” and demands that he “be guided by” her (1.3). She tells him that she has worked out the necessary details with Charlotte, who (like her) “has Understanding and Wit”; she reassures him that all she wants from him is “Obedience” (1.3). The inversion of gender roles is made visual for a theatre audience just moments later when, in order to escape detection by Doiley and Gradus, Granger must disguise himself as a woman, an idea he initially protests:

Granger: What! make a woman of me—by Jupiter—
Charlotte: Lay your Commands on him—if he does not submit we are ruined.
Miss Doiley: Oh—you shall! I insist upon it—here— I’ll hide him in his close Bonnet and Veil. (1.3)

According to the to gender dynamics of the Georgian period, he is being made a woman in more ways than one here: beyond his dress, he has also already adopted a submissive position by agreeing to obey Elizabeth. Charlotte, in the exchange above, recognizes Elizabeth, not Granger, as the authority figure whose commands are carried out.

Once dressed as Mrs. Taffety and told to speak “broken English,” Granger seems to relish the role. He finds freedom in his disguise and voices his disapproval of Doiley’s choice of son-in-law with a frankness that would have been permissible neither in polite Elizabeth nor gallant Captain Granger. As an outsider, Granger’s Mrs. Taffety can remark and insult with no threat of reprisals or challenges, so he offers his opinion of Gradus: “Vy, he speak like von Dictionaire Maker, and look like von Physicienne,” asserting that Gradus might make a fine professor, but would most likely be such a bad husband that as his wife, Elizabeth would look for comfort in the arms of other men (1.3)1. The prediction of cuckoldry serves to threaten Gradus’s masculinity while reinforcing the virility of the man who might step in to satisfy the future Mrs. Gradus—the implication being that the first in line for such an agreeable task would be Granger himself, who is at the moment dressed in skirts, following the orders of his sweetheart, and perhaps in need of a little manly bravado.

In The Merry Wives of Windsor, however, Falstaff’s female disguise does not grant him similar freedom—while the audience is meant to laugh with Granger, they are expected to laugh at Falstaff. There is a reason for this, of course. Granger and Elizabeth are the young lovers everyone is rooting for, while Falstaff is a dissolute knight ineptly trying to seduce other men’s wives. But each man’s contrast with the other female characters also creates comic depth. On Shakespeare’s stage, there would be a difference between the skilled performances of womanliness displayed by Mistresses Page and Ford and the blustering amateurish high-jinks of Falstaff. He is laughable in part because he is an untalented actor, incapable of inhabiting his role with the same conviction as the other “women” in the scene. They have set a standard and he has failed to live up to it. Granger, however, is surrounded by biological women. No one truly expects him to be as convincing as they are, so an audience can sympathize with the impossibility of his task. His performance is judged less harshly because no one on stage is doing it better than he.

Although both plays experiment with gender inversion through their benevolently scheming heroines, the patriarchal structure is maintained in the end. In Who’s the Dupe?, Elizabeth ultimately bows to the whim of her father and agrees to marry the man of his choice. Fortunately, due to her plots and Granger’s performances (first as a woman and later as a scholar), Doiley selects Granger rather than Gradus. (Gradus has managed to charm Charlotte, though, so there are two happy couples at the play’s conclusion.) Cowley employs a similar trick in A Bold Stroke for a Husband as Olivia manipulates her father into innocently suggesting she marry the man she’d wanted all along. Cowley’s heroines frequently maneuver within the parameters of propriety, bending but never quite breaking rules in order to achieve their desires. The end result is satisfying and non-threatening to patriarchy, but the means are atypical. There is never any doubt that Elizabeth will marry the man her father chooses, but she will guide his choice by any method necessary.

The women in Merry Wives (including Anne Page) similarly deploy their wits for a good cause: the wives to defend their honor and punish a presumptuous man; and Anne, like Elizabeth, to marry the man of her own choosing. Falstaff and Masters Ford and Page are the victims of the women’s mischief, but their positions in the patriarchal structure are under little threat (Ford and Page join their wives in a final vengeful episode at Falstaff’s expense). In fact, by asserting their own virtue, the women also protect their husbands. Ford is particularly anxious about suffering the indignity of cuckoldry, which would demonstrate his masculine shortcomings and reveal him as a man incapable of satisfying his wife sexually and unable to exert the proper authority to control her actions. Having a virtuous wife is a reassurance of his own powerful position, even though it takes her cleverness to ensure it for him. On Shakespeare’s stage, patriarchy was even less threatened, because there were only men—the women might have outsmarted the men, but the women were (under their dresses) actually men, so men were still, in essence, superior.

Unlike A Bold Stroke for a Husband, Who’s the Dupe? contains no overt references to Shakespeare, but Cowley explores similar themes of performance and female wit. Her 1779 farce follows in the tradition of clever women outsmarting their husbands to mutual benefit and comic exploitation of gender role reversal. While The Merry Wives of Windsor did not invent these tropes, and Cowley was not the only one to experiment with them, the two plays serve as significant markers along the continuum of theatrical sexual politics by providing non-threatening but powerful pictures of what it might mean to be, or be like, a woman.