The WWP is delighted to report that we have added six new texts to Women Writers Online. These are: Hester Chapone’s 1777 A Letter to a New-Married Lady, Emily Clark’s 1819 The Esquimaux (vol. 3), Anne Conway’s 1692 Principles of the Most Ancient and Modern Philosophy, Caroline Cushing’s 1832 Letters, Descriptive of Public Monuments, Scenery, and Manners in France and Spain (vol. 2), Sarah Osborn and Susanna Anthony’s 1807 Familiar Letters, and Mary Pix’s 1699 The False Friend.

In addition to spanning three centuries, these texts highlight the diversity of genres in Women Writers Online, representing travel writing, drama, philosophy, epistolary writing, religious meditation, and the novel. For more information on these texts, and the WWP’s other recent publications, please see this list of new additions to WWO.

Accompanying the publication of these early texts by women, we have added nine new exhibits to Women Writers in Context, an experimental publication series designed to engage readers in exploration and discovery of topics related to early women’s writing.

Some highlights from the new texts in WWO include:

An advertisement for an elixer that the publisher of Conway’s Principles shares “for the good of the public”:

The Elixir Proprietatis (ſo highly commended by the Renowned Paracelſus and Helmont) it reſiſteth all Putrefaction of the Blood, ſtrengtheneth the Digeſtive Faculty. Its Excellent Virtues are prevalent in the Curing of continual Fevers, Quotidian and Tertian Agues, Small Pox, and Meaſles, or Swine Pox, with other Peſtilential Diſtempers; as alſo the Palſy, Apoplexy, Falling-Sickneſs, Aſthma’s, Tabes, or Conſumption of the Lungs. Its Doſe is from 10 to 20, 30, or 40 drops in a Glaſs of Sack. This Noble Elixir is Philoſophically prepared, by John Spire, Chymico Medicus, at four Shillings the Ounce. Who hath, by his Labour and Study in the Chymical Art, attained unto ſeveral ſecret Arcanums, (not vulgarly known) particularly a Soveraign Remedy for the Gout. If any one is deſirous therefore, or the aforeſaid Elixir Proprietatis, Let them apply themſelves to my Friend, Mr. Dorman Newman, at the King’s Arms in the Poultry, and the Author at his Houſe in Horſly-down-Fair- ſtreet, Southwark; or at his Country Houſe, at the upper end of Twitnam, near the Sign of the White-Hart, in Middleſex.

Some advice on handling a difficult mother-in-law in Chapone’s Letter:

I am told that he is an excellent ſon to a mother, who, with many good qualities, has defects of temper which determined him to decline her continuing to live with him after his marriage. In this he is equally kind and prudent; for though he could himſelf meritoriouſly bear with failings to which he had been accuſtomed from his infancy, in a parent who doats upon him, yet this would have been too hard a taſk upon you, who have not an equal affection to support your duty, and to whom her ways would have been new and unuſual. But though I thus far highly approve his conſideration for you, yet you muſt remember how great a part of her happineſs ſhe is thus deprived of on your account, and make her all the amends in your power by your own attentions, as well as by promoting opportunities of indulging her in the company of her ſon….Be armed againſt the ſallies of her temper, and predetermined never to quarrel with her, whatever ſhe may ſay or do. In ſuch a relationſhip, this conduct would not be meanneſs but merit; nor would it imply any unworthy compliance or falſe aſſent; ſince ſilence and good-humoured ſteadineſs may always preſerve ſincerity in your converſation, and proper freedom in your conduct. If ſhe ſhould deſire to controul your actions, or to intermeddle in the affairs of your family, more than you think is reaſonable, hear her advice with patience, and anſwer with reſpect, but in a manner that may let her ſee you mean to judge of your own duties for yourſelf.

And some very dramatic pauses, indicated by extra whitespace in both the original text and WWO, from dying characters in Pix’s False Friend: 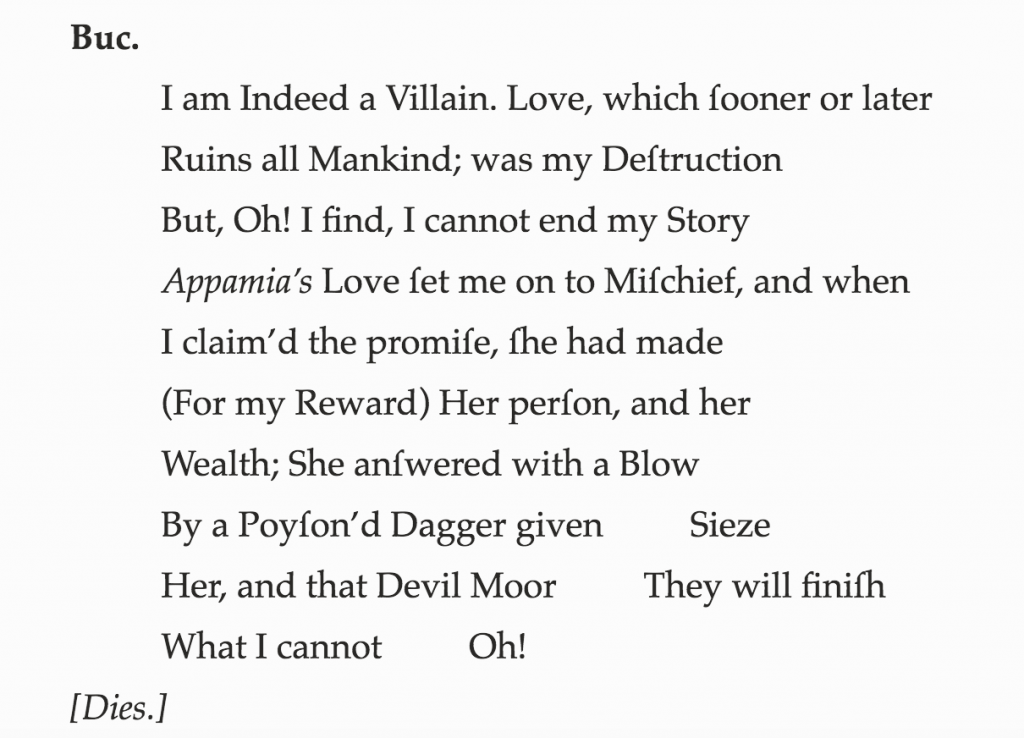 We hope that these new publications will complement each other, inviting readers to explore works by women from multiple angles and perspectives—and we hope our readers have as much fun exploring the texts as we have had preparing them for publication!