This is a post in a series authored by our encoders on the Intertextual Networks project. For more information, see here.

One of the distinctive features of a collection of early modern texts is the large amount of biblical references and quotes. For the Women Writers Online corpus, this is particularly evident. There are approximately 3,800 biblical references throughout the WWO collection, each of which have been tagged with the elements <regMe> (or “regularize me”—for the citations to be regularized in the future) and <bibl> (bibliographic citation). This post will uncover some of the challenges and surprises stemming from the process of tagging these references, particularly in how to deal with authors who cite the Bible differently and overcoming language barriers. I will also discuss some of the quantitative findings from this process of marking up the WWO archive that illustrate how useful this markup can be for a corpus of texts.

After being handed the neatly organized collection of biblical references in WWO, I realized that the task was not as easy as the visually-organized data within Google Sheets made it  appear. It was not just labeling a reference as a quote from 1 Corinthians if I see an author use “Cor,” but actually a process of validating the quote, determining if the author was correct in referencing it, and then determining the language the author was using (as many of the biblical references were in languages other than English). Parsing through Biblical references can be much more complex a process than expected for early modern corpora, with some of the energy for the project being used to note needs for encoding updates—usually cases where <title>is used instead of <regMe>.

The largest obstacle from researching the biblical references in the WWO was that most authors quoted the Bible differently. This led to certain challenges: if someone is paraphrasing a memorized biblical quote, as many of the authors did when incorporating biblical verses into their prose, then it can be difficult to confirm if these quotes are correctly referenced by the author. As a historian, I kept reminding myself of the challenge of putting myself into a different period of time to think like someone in that era. In the 16th, 17th, and 18th centuries, many writers in the Western world knew parts if not all of the Bible by heart. I recognized that many of the earlier texts in the WWO archive were chock-full of personalized recitations of Biblical verse. I knew this because I never saw the same biblical verse written verbatim between texts. I became used to this fact after working through a few dozen <regMe>s that were all pulling from the same biblical book, but were each written quite differently. One example is that Corinthians, books 1 and 2, were frequently referenced, yet each reference was noted in the author’s text in a different way, whether it was with a direct quote from a specific chapter abutting the bibliographic reference, an allusion to the moral of a section in the canonical book, or a reference list at the end of the author’s text.

Many websites were useful when searching for which verses originated in which books of the bible (including Bible Gateway and Bible Search). Becoming fluent and resourceful with researching biblical citations is necessary for proper bibliographic notation in encoding early modern texts. These sites often provide various biblical editions and languages of the Bible to run a search on, which also made clarifying the reference even more easy. However, rechecking the validity of a source with other sites and documentation is needed to make sure the citation is correct. With so many versions and editions of the Bible in existence, a specific answer may be elusive to find with one simple search.

Comfort with language translation was also key for this work because many of the early modern texts I was working with would reference the Bible using Latin, German, French or Italian editions. Educated women were often polyglots, so it was common for them to have access and read the Bible fluently in other languages. Having knowledge of Latin and German myself, I found it to be easier (and fun) to try to guess the various languages the references were in than the second part of deciphering which part of the Bible the quote was coming from and then confirm it with translation platforms online. For example, “Regum” was used for Kings, “Petri” for Peter,  and “Tessa” was an abbreviation of the Spanish for Thessalonians.  Another challenge arose from dealing with i/j and u/v shifts and with abbreviations, which made determining if a reference means John or Jonah often very difficult without further research.

Another thing to note when creating a biblical bibliography of references is that some citations can never be found with the context clues (or lack-thereof) that the authors leave. There were certainly a handful in the WWO corpus that were impossible for me as a graduate student to find, and would need a biblical scholar to determine what the author was referring to. For example, “cap.” was a shortened version of the word “chapter,” and the authors would commonly put “cap. 1” or another chapter reference to a vague quote or phrase, yet never mention the canonical book they were pulling from. Many of these instances I found difficult to identify, and those that remain will be passed along to a biblical expert to help decipher these citations. 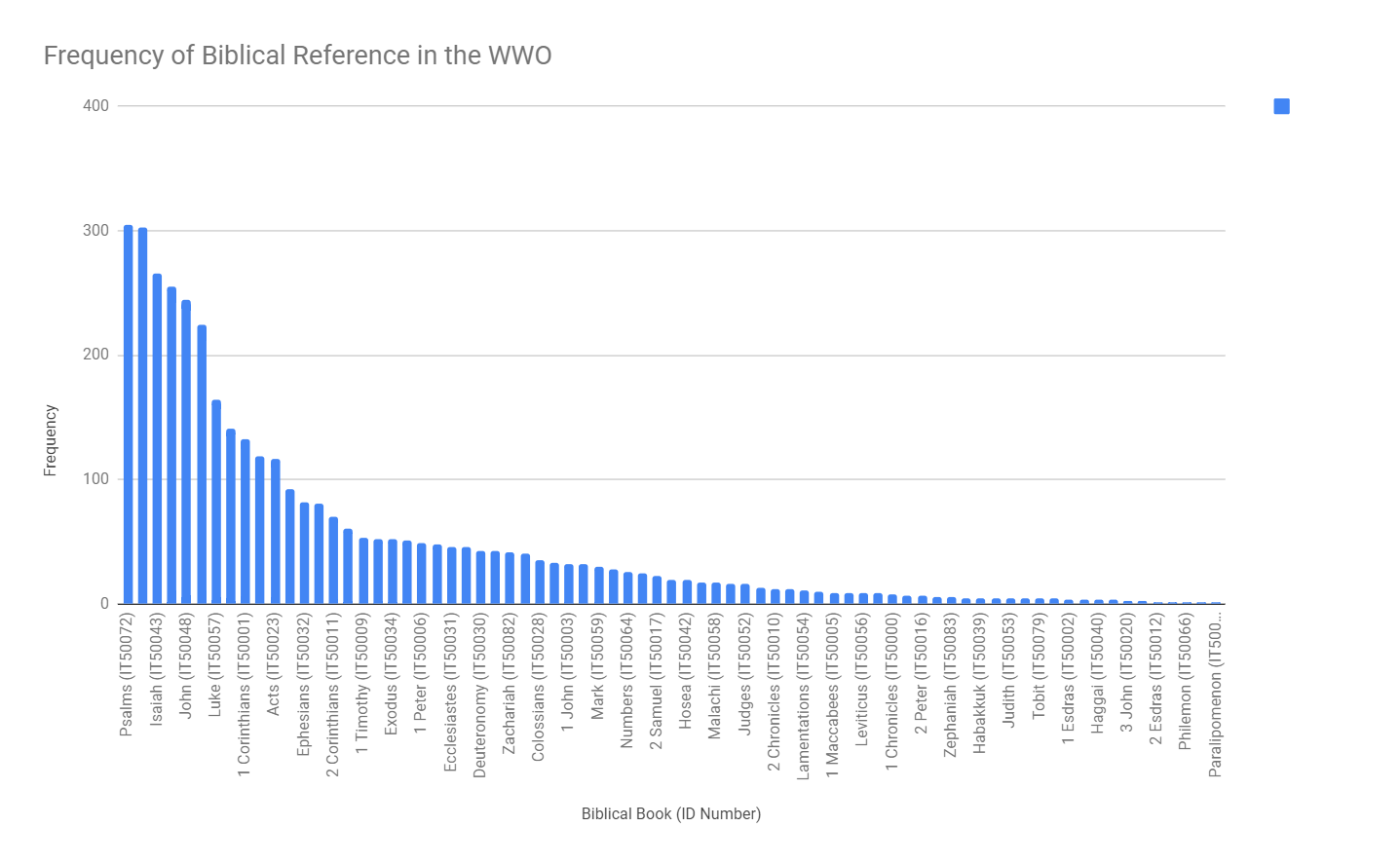 After all of the references were labeled in the corpus, I was able to run simple quantitative analyses for this project. The initial results (graph above, table below) show what were the most referenced biblical books in Women Writers Online. From the ordering of this data, we can see that a few books were used quite often in texts, and then a lot of the other, less well known books are mentioned only a few times. The Books of Psalms, Matthew, and Isaiah were the three most referenced books in the WWO corpus, with 305, 303, and 266 citations, respectively. After collecting the numerical results, a humanist can then ask the big questions: What are strong themes from this corpus of women writers based on religious references? What can we determine from how often a book is used? Are there similarities between authors never seen before through the analysis of this religious data? These are questions that can be answered when noting biblical books using TEI markup. While the process of going through and confirming references may be challenging at times, the added data can convey other themes and relationships between books, authors, and genres, providing added depth for textual analysis, particularly with an early modern corpus where such biblical references are so frequent.